Watch the video below for an overview of events The 100 Club of Solano and Yolo Counties puts on and supports.

Ever wonder what happened to the actor who played Eddie Haskell on Leave It To Beaver? He became a LA police officer, and passed away on May 18, 2020. Click here to learn more about his interesting life!

From the Vallejo Times-Herald, by Richard Freedman

The man who found the late Vallejo Officer Jeff Azuar’s gold badge in a Vacaville garage sale and returned it to Azuar’s daughter said he’s hardly a hero. “Anyone would have done the same,” said Roger Waring. “I have high respect for our police. In this day and age, it is very difficult being a police officer.” As reported in the Times-Herald on Thursday, Waring discovered the badge that had gone missing after it was given to Azuar’s father, Joe Azuar, after the 21-year Vallejo cop was killed in the line of duty April 12, 2000.

The badge, apparently, ended up in a storage unit that was auctioned off following the elder Azuar’s death in 2013 at 96. A Vacaville resident and St. Patrick-St. Vincent High School of Vallejo graduate, Waring said he was driving around looking at garage sales with his wife two Saturdays ago. “I noticed in the corner of the garage among the items that were not for sale was a badge propped up on a shelf with what looked like a semi-automatic hand gun,” Waring said. “Although I could see it was a pellet gun, I asked if the badge was for sale, as it would be a great addition to my small collection. The lady was reluctant, but with my haggling, I was able to purchase it along with a bunch of things I had to buy to get it.”

Waring said it was “short of a miracle I was able to talk them out of it.” Unknowing of the badge’s history, “I was so proud to get this new addition to my collection,” said Waring, a reserve Suisun officer in the late 1970s and early ’80s. When he returned home, Waring went on the computer to research the badge number “and I found the tragic story associated with it.” Waring realized immediately that the badge’s rightful owner was Azuar’s daughter, Mandy Azuar, now living with her husband in Germany.

Waring found her on Facebook, exchanged messages, and Azuar received the badge in the mail earlier this week. “I wish I could find words to tell you how much it means to me that you found his badge and tracked me down,” Azuar emailed Waring. “It is so nice to have reminders how good people are.” Waring declined reimbursement from Mandy and from the Vallejo Police Dept.,  “knowing how happy” she is with her father’s badge “is payment and a wonderful feeling for me.” Azuar said she last saw the gold badge “very shortly” after her father was killed.

“I had two (badges), so I kept one and gave the other to my grandfather,” she said. Azuar said a woman neighbor of her grandfather “sold his house and put him in a convalescent home. I believe she put all of his belongings into a storage unit and then stopped making payments. The people that Mr. Daring bought the badge from had purchased the storage unit contents.” When Azuar opened the package with the badge, “I thought about how much good there is in the world. Mr. Waring is the epitome of good.”

Azuar said she “will never be able to have enough words to tell Mr. Waring how much he and his selfless actions mean to me.” Vallejo Police Chief Andrew Bidou was equally grateful, saying he was “very thankful that Mr. Waring was willing to preserve this important piece of history and symbol of service and sacrifice.”

Waring was perfectly happy that his collection that includes his grandfather’s purple heart — he died in Battle of the Bulge — would go without Jeff Azuar’s Badge No. 371. “I’m just so grateful to be part of this story and reconnecting Mandy with her dad’s badge,” he said. 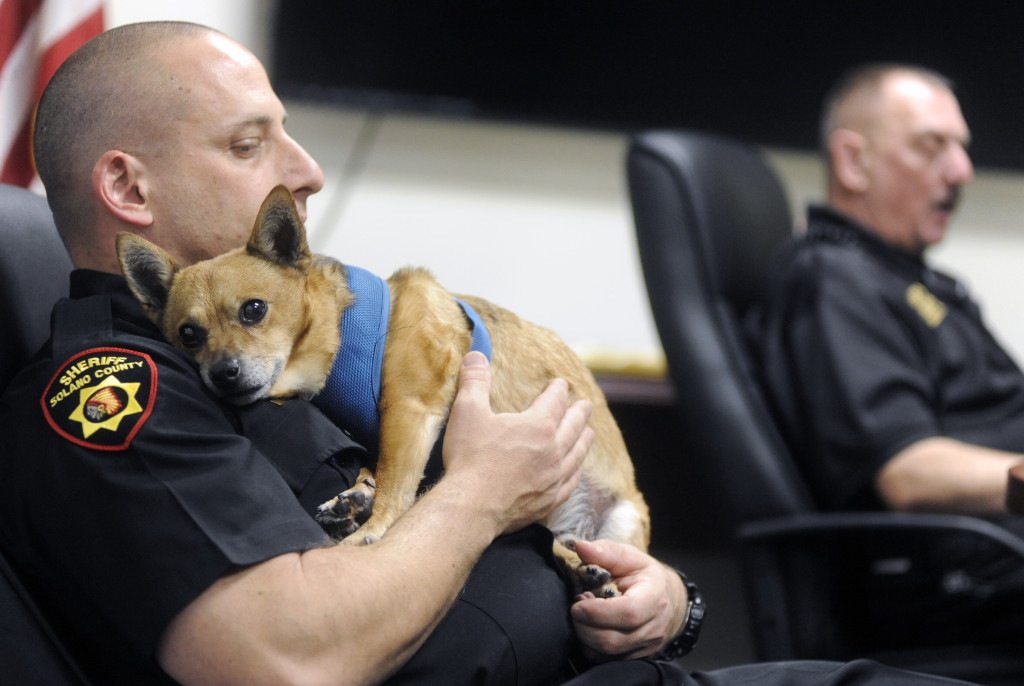 Lt. Jon Mazer holds Dude at the Solano County Sheriff’s Department Coroner’s office in Fairfield, Thursday. Dude is on a week-long loan from the Solano County Animal Shelter as part of a wellness program to improve work morale. Five dogs have been adopted through this program so far. (Aaron Rosenblatt/Daily Republic)

FAIRFIELD — Being around a dog can make your day better.

That is the basis behind two canine-centric wellness programs involving the Solano County Sheriff’s Department. One involves Kepi, a specially trained 3-year-old Labrador retriever, who has partnered with Chaplain Robert Duvall to help law enforcement
personnel and civilians through stressful, tragic times. The other involves a changing cast of Solano County Animal Shelter canines who take up a week-long residence at the department to make employees’ days better. In return, the employees may decide to adopt the dogs. So far, all six dogs to have come to the department during the past two months have been adopted.

Duvall started his law enforcement career with the San Pablo Police Department before joining the Contra Costa Sheriff’s Department where he worked until 2012 when he was forced to retire due to a serious medical condition. After his recovery, he discovered his calling to become a police chaplain. As a law enforcement officer, he had long understood the stress that public safety officers live with. He also understood the emotional pain that crime victims suffer. He started in 2012 as a volunteer with the Dixon Police Department and expanded to the Solano County Sheriff’s Department, which he signed on with in July. Duvall also contacted the Santa Rosa-based nonprofit Canine Companions for Independence that has provided assistance dogs for those with disabilities since 1975.

Initially hesitant about Duvall’s proposal about a law enforcement therapy dog, Canine Companions trained him and paired him up with Kepi. The duo graduated in November 2015, and Kepi started accompanying Duvall when he went to notify next of kin about someone’s death. The departments Kepi and Duvall work with help provide for the dog’s support. They make regular visits to the participating police departments and the Solano County Sheriff Department’s different offices from dispatch and administration to jail and the coroners’ office. They are usually at least 30-minute visits “to give everyone a chance to know her,” Duvall said. Duvall and Kepi are also part of a peer support team that provides support for both police officers and for civilians. “I stay as long as I am needed,” Duvall said.

He says Kepi makes a huge difference, opening a lot of emotional doors “that otherwise would not be opened.” At one fatal traffic accident where a mother died, when Duvall and Kepi visited the family, the youngest daughter “just ran over to Kepi and started hugging her.”

“Dogs, especially labradors, can sense if someone is upset,” Duvall said. “She is really good at pointing out when someone is struggling.”

When it comes to support for officers, Kepi’s senses allow her to make a subtle  assessment at Duvall’s command and alert Duvall. “I then can make contact with them later to let them know that I am there for them,” Duvall said. Duvall’s goal for he and Kepi is to continue reaching out to public safety officers “so we can be used more.”

They are getting requests from other agencies such as CalFire to meet firefighters who are coming off shifts on fire lines. Some departments such as Oakland Police are starting similar programs.

Kepi isn’t the only canine to be making the rounds of the sheriff’s office these days. Starting two months ago, she has been joined by a changing cast of Solano Animal Shelter canines who have taken up residence at the department to raise morale and promote well-being. “Our entire day has been made better,” said Sheriff’s Lt. Jon Mazer while holding the latest visitor, a 5-year-old Chihuahua/Corgi/shizhu mix named Dude.

The idea of bringing a shelter dog to the Sheriff’s Department was one of the first projects to grow out of an employee wellness workshop. The idea had a dual purpose: To have the dog serve as an employee stress reducer, and to get homes for the dogs. Initially, it was to bring four to five dogs to the department for employees to take on lunch breaks. It was narrowed down to a single canine visitor who would show up every Tuesday wearing a vest saying ‘adopt me’ and stays in a room designated as a kennel when the dog is not visiting employees. “They can take the dog for a 20-minute walk around the courthouse grounds which is good exercise for both and they both feel better,” Mazer said. Six dogs have gone through the program starting with a year-old pit bull/terrier mix named C.J. who ended up adopted by a volunteer search-and-rescue leader. C.J. was then followed by other shelter residents – Shiloh, Decoy, Shrimp, Skye, Dude and now Lucky, who is the current department dog in residence. Decoy was adopted by a mortuary owner’s family while Shiloh, Shrimp, Skye and Dude were adopted by employees before the week was out.

The department has started seeing some nice side benefits to having the dogs around. “People who don’t otherwise talk, congregate around the dog,” Mazer said, who added that “the dogs have been so successful inside that they have not gotten out much.” Mazer stated the positivity around the department has been much higher thanks to the dogs with no loss to productivity “since happier employees call in sick less.” The programs future is simple, “more dogs,” Mazer said, and possibly canine visits to the county’s other departments and other nearby public safety agencies. “We have a lot of great dogs waiting to be adopted,” Mazer said. 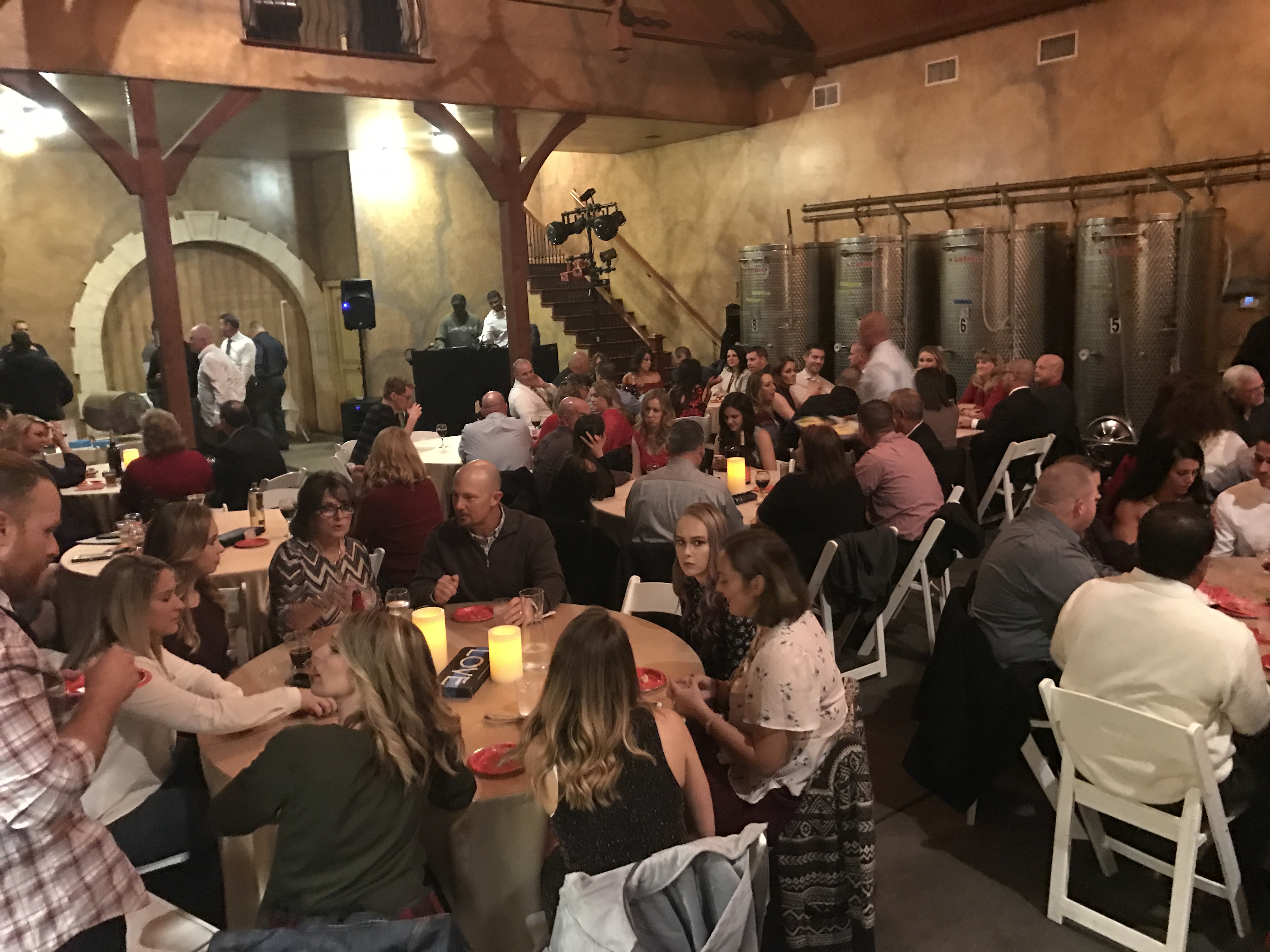 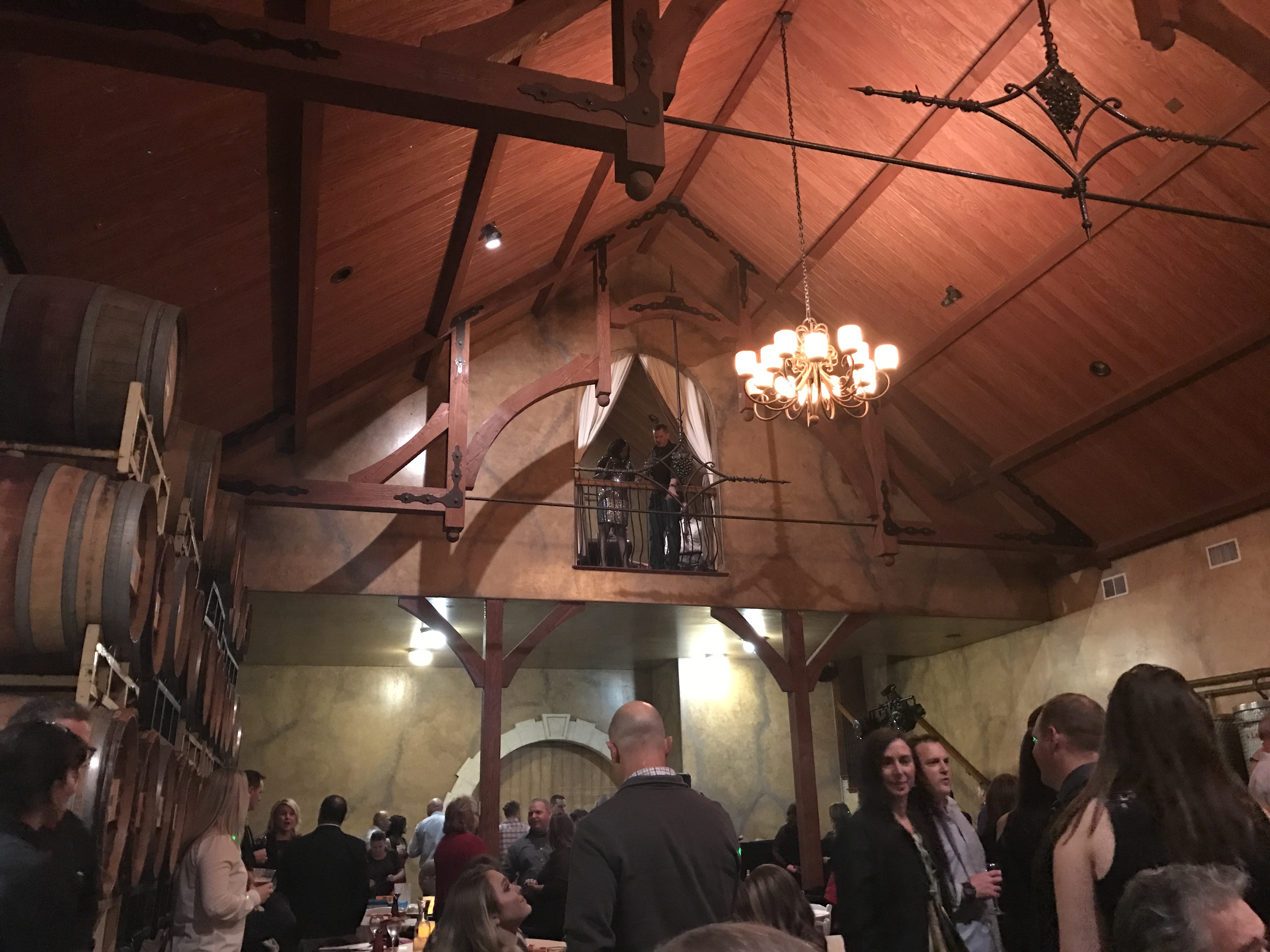